Have you seen our new Lo-Cal Balancer sack and wondered who the cover star is? Mr Tom is a 15-year-old traditional cob gelding standing at 13.3 hands, owned by 76-year-old Margaret Taylor for the past 6 years and is kept with her daughter, Linda.

When he first arrived, Margaret found Tom a bit fat and lazy so, when Linda was at a training camp, that summer, she spoke to the Baileys Feed Advisor in attendance, who recommended Lo-Cal Balancer for Mr Tom. The difference it made to Mr Tom was just what Margaret was looking for; he changed shape, as he lost flab and gained muscle, and felt much more enthusiastic about work, without being silly. He has been on Lo-Cal balancer ever since!

Margaret describes Mr Tom as ‘the most beautiful pony, inside and out. You can do anything with him, and he looks after me so well.” His only bad habit is a love of mud! “He has a mud spot in the field, and his knees start to buckle, as he gets five strides out, and then he just wallows!” Margaret enjoys riding Mr Tom at least 5 days a week and they go off hacking together for an hour or more at a time, and occasionally ride in the school before he’s turned out for the day. 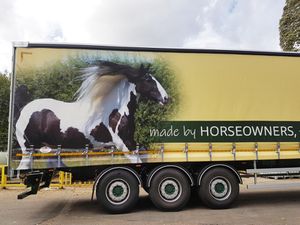