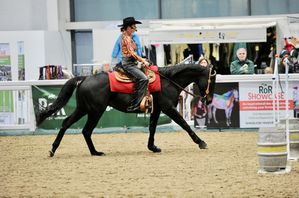 The RoR (Retraining of Racehorses) hosted the first Showcase of its kind at Aintree International Arena, Aintree Racecourse, last weekend. The day consisted of displays and demonstrations from a range of professionals with their ex-racehorses.

Western Rider, Emma Chapman, and Baileys-fed, Midnight Robbery, were asked if they could demonstrate Western Riding. Midnight is a 5-year-old gelding, who has been with Emma for just over a year. He is fed No.21 Ease & Excel and ‘looks and performs amazingly on it.’ He was the youngest horse demonstrating at the showcase.

When asked to give a demonstration at the showcase, Emma was 5 months pregnant, so she was a little concerned at the timing - it would be just over a month after her due date! But as a true testament to Midnight's nature, she continued to ride throughout, even if it was fairly sedate!

Baby arrived in October and after a two-week break, she was back in the saddle and preparing to show off western to the best of her ability. 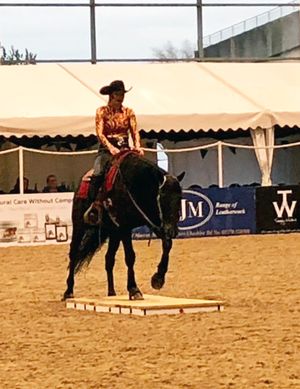 She arrived at Aintree on Friday afternoon, allowing plenty of time to have a ride in the arena. The atmosphere of the racecourse brought back memories for Midnight and he was a little excited walking down to the arena but, after 5 minutes of their usual warm up routine, he was back to normal. He did get some lovely comments from fellow riders warming up, especially on the length of her reins!

Saturday morning came around very quickly and the showcase got underway. Meanwhile, in the stable yard, Emma was midway through banding Midnight's mane and putting the final sparkle and shine to him.

Their demo was at 2.20pm. As Emma made her way down to the arena, down the horse walk and underneath the grandstands, the butterflies were fluttering in her stomach. Midnight warmed up like a dream and they walked between the stands, into the centre of the arena. They seemed very small in that big arena but, after a slight hitch with the microphone, Midnight began to dazzle the crowds with his suppleness and effortless performance in the western gaits. They also showed a selection of western trail obstacles, demonstrating the manoeuvrability and trust required during these disciplines. The 40-minute demo flew by and we couldn’t fault Midnight’s performance, he was calm and relaxed but responsive to all questions. There was genuine amazement at the quiet and relaxed nature of the horse and the responsiveness and willingness of the demonstration changed a few minds about Western riding.

The pair ‘thoroughly enjoyed the whole experience and hope to be asked to attend next year.’ For now, there are lots of plans in the pipeline to get more horses and riders taking part in western riding, especially ex-racehorses with the help and support of RoR.