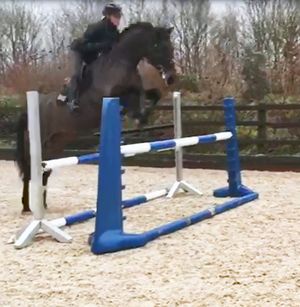 It seems like only yesterday that Roxie was taking part in the BEF Futurity evaluations as a youngster. She's now embarkign on her career as an eventer under Georgie Strang.

At the beginning of January, Roxie (Cawrus Girl) returned to Georgie Strang to continue her training as a young event horse. Roxie has got a big dose of her mothers’ attitude and is not one to be trifled with despite being only four-years-old. My husband says that if she was a girl, she would be the one all of the boys would want to date but would never take home to meet their mother! She loves a nibble, especially if it can lead into a bit of criminal damage.

As a yearling, she took a fancy to a neighbour’s car parked a little too close to the fence line. She gave it some new go faster stripes, in the shape of her front teeth, down both nearside doors and front and back wings before deciding that the mirror was an optional extra that the driver really did not need. Georgie will be moving Roxie along with her other horses to Jesse Campbell’s yard, later this month. Thank fully there are no vehicles parked close to his fencing.

Roxie has done some show jumping and cross-country schooling, working on straightness and remaining in front of the leg. This is allowing Roxie to build her jumping confidence in a non-competitive environment whilst exposing her to different locations. She is enthusiastic about her work and has already completed her first unaffiliated dressage competition coming first and second in her first two tests. She was not fazed by the windy day or the strange surroundings.  Next week, she will complete her first indoor cross county event. This is all good education ready for her initial eventing debut.