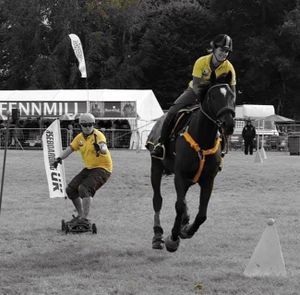 Adam and Ellie started Horseboarding in 2017 with their first competition at a three-day event in Cheshire. So, in total now, they have been Horseboarding for one and a half years.

They started Horseboarding because Adam kept falling off horses and decided that riding may not be for him. However, he could skate board and they thought why not combine the two. While looking into the idea of combining skate boarding and horse riding together, they found out that it was already an actual sport! They contacted Horseboarding UK and got themselves down to the South West Training Centre to try it out, properly.

Towards the end of our first Horseboarding season, they decided to start looking for a new horse for the 2018 season as Marshall (who was 28 years young) was 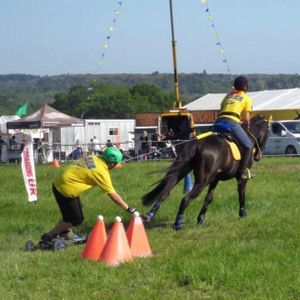 getting a bit old to keep up with the younger horses. They brought Pelican Gerry in February 2018 and immediately started training him, focussing on flat work and pole work as he was extremely unbalanced. They also did lots of hill work and gallops to increase his stamina and strength. To keep him in condition and correctly muscled, Gerry is fed on No.4 Top Line Conditioning Cubes. Meanwhile, to keep fit, Adam goes to the gym twice a week, does an insanity class once a week and skis in the winter.

The biggest challenge the team have faced was the start of the 2018 season when the three of them hadn’t fully bonded as a team and that is an essential part of Horseboarding. Because Gerry was so unbalanced to begin with, he struggled to take corners and the technical elements on the Horseboarding Track but with continued training his balance and stamina improved. As he improved, this brought a lot more confidence and speed to the mix, which added a new challenge for Adam. 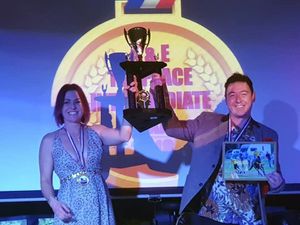 They really worked hard to build their team cohesion through the season, with many weekends spent sharpening skills at the South West Training Centre. It all paid off because by the end of the season they felt like a strong team again and managed to win the 2018 Baileys Horse Feed Intermediate Horseboarding Championship 2018!

Watch this space for more updates on Horseboarding UK and our involvement in this new and rapidly growing sport!