What's in that little nugget?

What – Wheat which is meticulously “toasted” to ensure the starch content is made as digestible as possible.

Why – This is integral to forming the structure of the Outshine nugget.

What – “Toasted” and ground to perfection to optimise digestibility and availability of both its oil and protein content.

Why – It’s a rich source of Omega 3 fatty acids, which have anti-inflammatory properties as well as being a concentrated source of slow release energy.

What – Oil from the soya bean, “applied” to the Outshine nugget using unique vacuum technology.

Why – It’s rich in Omega 6 fatty acids, which have pro-inflammatory properties as part of the body’s immune response.  They are also a concentrated source of slow release calories, helping make Outshine the most calorific high oil supplement of its kind.

What - The outer husk of the soya bean is rich in “superfibres”, which are more digestible than “traditional” fibres.

Why –Their superfibres contribute to Outshine’s slow release calorie content.

What - The meal left after the oil has been removed, which is an even more concentrated protein source than the whole beans.

Why - Widely recognised as the best source of quality vegetable protein, with a good amino acid profile, to build muscle and repair body tissue.

What – A combination of vitamins and minerals which have antioxidant properties, helping neutralise free radicals produced during the body’s metabolism of oil.

Why – The greater the amount of oil in the horse’s diet, the greater the requirement for antioxidants.  Outshine contains appropriate levels so further supplementation is not necessary, giving it a great advantage over straight oil.

What – These are the building blocks of all body tissues and are supplied by Outshine’s soya bean meal, while some extras are added to boost overall dietary levels.

Why – Whether it’s strong tendons, ligaments and muscles or soft, supple skin, amino acids are integral to all so Outshine is formulated to ensure requirements can be met.

What – This is a food source for beneficial gut bacteria to help them flourish at the expense of pathogenic species.

Why – A healthy gut is more efficient and able to extract every bit of goodness from the horse’s diet.

What – Extracts of flavours of essential oils which have been found to tempt many a fussy feeder.

Why – Because it is so concentrated, Outshine is often fed to horses with a limited appetite so these unique natural flavours encourage them to clear their bowls!

Outshine is “energy-dense” and supplies lots of slow release calories in a small volume.  For example, one mug of Outshine contains the same number of calories (MJ/kg) as a whole Stubbs scoop of Alfalfa Plus Oil.

Outshine’s calories are slow release so won’t exacerbate excitable types.  It’s also ideal for horses whose starch intake needs controlling, like those who are fussy or stressy.

Oil is said to be “glycogen-sparing” which has the effect of improving stamina and delaying the onset of fatigue.  Outshine’s 26% oil helps increase the overall levels in the diet and its in-built antioxidants ensure the body can make the most of it.

How to Feed Outshine - By the mug-full!

Outshine should be added to an existing balanced diet, ie. the daily recommended amount of an appropriate mix, cube or balancer.  This should be divided into as many small feeds per day as possible.  Adding Outshine will bring overall dietary calorie levels up, without significantly increasing meal-size.

There’s a lot more to a healthy shiny coat than a blob of oil so making sure your horse is getting a fully balanced diet, then add just one or two mugs (225g to 450g) of Outshine per day to help create head-turning coat shine.

Depending on requirements and the calorie levels of the existing diet, up to 6 mugs (1.3kg/3lb) of Outshine per day, can be added to provide a significant calorie contribution.

· Starch – 19% (this looks high but, because of the low feeding rates, its overall contribution to dietary starch levels is minimal.  The fact that Outshine is a key ingredient in Ease & Excel, specially formulated for those prone to gastric ulcers, is testament to this)

· The blend of Omega 3 and 6 fatty acids supplied by Outshine, is designed to mimic that found in natural forages and ensure that an optimum balance is supplied to the horse.

A Comparison of Straight Oil Products and Oil Supplements 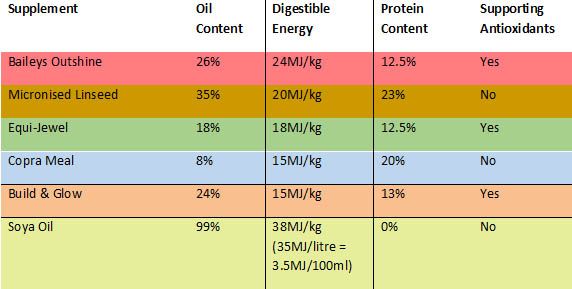 · For every 100ml of oil added to the diet, 100IU of vitamin E is required to provide the necessary antioxidant support.  Straight oil products require the use of a separate vitamin E/selenium supplement.

· 100ml of soya oil provides 3.5MJ of DE, while 1 cup/225g of Outshine provides 5.4MJ plus the necessary supporting antioxidants.

· While protein levels may seem higher in the “straight” oil products, as it is Crude protein, it is unlikely to be as available to the horse as the protein in the specially formulated supplements.

· If you’re feeding for calories, check the DE of your chosen supplement.