Feeding and Managing a Horse with Polysaccharide Storage Myopathy 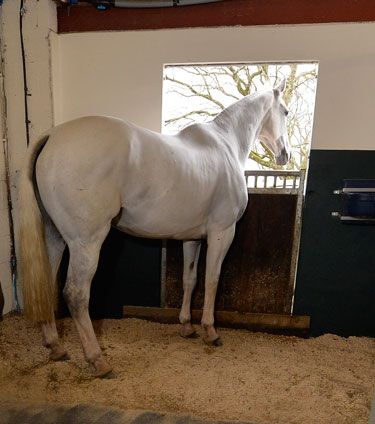 Recurrent episodes of muscle stiffness or tying-up, with varying severity, may indicate that a horse is suffering from polysaccharide storage myopathy (PSSM), which results in an abnormal accumulation of glycogen (a polysaccharide) in the muscles.  Glycogen is the storage form of glucose, which is extracted from the bloodstream and held in muscle tissue until it is needed as fuel for exercise.

What is it?
Two types have been identified and both seem to be genetically linked to certain breeds.  Type 1 is caused by a mutation to a specific gene and is most prevalent in Quarter Horses and some European draught breeds, like Percherons and Belgian Draught, and warmbloods.  The cause of type 2 has yet to be discovered but it is most often found in Quarter Horses, Arabs and Thoroughbreds.

What seems to happen is that PSSM horses remove glucose from the blood stream at a faster rate than non-PSSM horses.  They also appear to be more sensitive to the hormone, insulin, which is released into the bloodstream in response to the carbohydrate content of food, and which stimulates the muscles to take up the resultant glucose from the blood.

What happens?
Symptoms are, in effect, those of tying-up, namely muscle stiffness, sweating and a reluctance to move.  Typically, an episode can begin after just very light exercise and some PSSM horses can even have symptoms at rest.  Most will have a history of numerous episodes, although some mildly affected horses may only have one or two in a year.  Genetic testing and muscle biopsy are necessary to diagnose PSSM and distinguish the condition from other forms of recurrent exertional rhabdomyolysis (tying-up).

Feeding a Horse with PSSM
As with other horses prone to tying-up, dietary management of PSSM horses is key, with the aim being to reduce soluble carbohydrate intake as much as possible.  Whilst forage should be the basis of any equine diet, for PSSM horses, hay or haylage with a water soluble carbohydrate level of 12% or lower is recommended as higher levels have been shown to increase blood insulin levels.  This is clearly undesirable in horses whose sensitivity to insulin means they produce excess glycogen.

PSSM horses should also avoid carbohydrate-laden cereal meals that induce a blood-insulin peak, as well as resulting in increased blood glucose, which is then converted to glycogen.  Because the breeds associated with PSSM are often good-doers, access to grazing in order to control calorie intake may be necessary and will have the added benefit of controlling dietary sugar and carbohydrate levels from grass.

Vitamins and minerals are essential for all working animals and particularly those with muscle-related disorders, who have increased requirements for antioxidants, to counter free radicals produced through muscle damage.  A balance of these, along with quality protein for muscle and tissue repair, can be provided by the recommended quantity of a pelleted forage balancer.  These are particularly appropriate as they are both low starch (carbohydrate) and low calorie.

Fibre Sources
Where calorie requirements are not met by forage alone, digestible fibre sources and oil are the only choice as the cereal content of mixes or cubes must be avoided.  Alfalfa chaffs, like Alfalfa Blend and Alfalfa Plus Oil, will provide digestible fibre and generally have a higher Digestible Energy (DE) content than hay or haylage, whilst those with added oil, often have a DE equivalent to a competition or conditioning feed.  The problem with these is that many horses do not find them palatable enough to consume the volumes required to provide the additional calories.

Oil Calories
Unmolassed sugar beet pulp, including Speedi-Beet, and the combined soakable alfalfa and beet products, like Fibre-Beet, are also useful sources of “safe” additional calories but the most energy-dense alternative is vegetable oil.  Oil supplies over twice as many calories as the same weight of cereals and can either be added in the form of straight soya or vegetable oil or via a high oil supplement.  A minimum of 200 – 500ml of straight oil is necessary to make a significant calorie contribution although, as dietary inclusion levels increase, palatability can again become an issue.

Horses cope well with elevated levels of oil in the diet as long as it is introduced and increased gradually to allow the digestive system to adapt.  The higher the oil level in a horse’s diet, the higher the body’s requirement for antioxidants to support its efficient metabolism.  Outshine high oil supplement contains the necessary nutrients and is less messy to feed, and often more palatable, than straight oil.

Electrolytes
Maintaining electrolyte balance is also important for working horses and those prone to tying-up so a lump of rock salt in the manger is useful, whilst a good quality electrolyte supplement, like Aqua-Aide, should be given whenever the horse sweats.  This is ideally administered in drinking water but can be mixed with the feed as long as this is fed wet and sloppy and the horse has constant access to fresh water.

Exercise Management
Ironically, even though a tying-up episode can be brought on by light exercise, once diagnosed and established on an appropriate diet, PSSM horses should have daily turnout and exercise rather than long spells in the stable.  If grass is lush, access may need to be controlled but use of a starvation paddock, yard or barn is preferable to confinement.

Exercise helps encourage the muscles to burn the stored glycogen and so reduce residual levels which can cause damage.  Consistent daily exercise is therefore essential and even 10 minutes of walk exercise can be beneficial.  Plenty of time should be allowed for the horse to warm-up and stretch, particularly for those diagnosed with type 2 PSSM, while frequent breaks from more collected work are also recommended.  With an appropriate diet and exercise regime, many PSSM horses lead useful lives with few, if any, tying-up episodes.  They remain susceptible however, particularly if exercise is interrupted for other reasons, and great care must be taken when bringing them back into work.