Feeding the Mare and Foal

The development of the foal begins right from the point of conception so it’s very important to feed appropriately from this time onwards.  It is often suggested that a high fibre, low energy feed, such as a cool mix, will meet a pregnant mare’s requirements through the first two thirds of the pregnancy but some simple maths suggests that this isn’t the case.

For example, a 500kg pregnant mare requires 190g of copper per day.  Assuming that she is stabled or barn kept over the winter months she could be consuming 10-12kgs of hay per day which will provide 60-70mgs of copper (assuming the hay has a copper content of 6mgs per kg).  Add in 2.5kgs of a high fibre feed at 35mg/kg and the mare’s total intake is between 147 and 157mgs per day.  That’s a deficiency of at least 33mgs!

The even more frightening element of this is that to find hay with 6mgs of copper is unusual, most of the forages analysed at Baileys are nearer to 3 or 4mgs per kg which would make the overall diet even more deficient.  Minerals like copper are vitally important in a mare’s diet because they, and other essential nutrients, are needed to build the cells and tissues that create a foal.  Research has shown that the foetus accumulates stores of minerals in its liver on which it can draw once it is born and growing very rapidly.  Without these reserves, Developmental Orthopaedic Disease (DOD) can occur as the foal grows.

Mares who are good doers often put on too much weight if fed a stud mix or cube during pregnancy.  For these types a Stud Balancer, that contains all the essential nutrients they need but has negligible calorie content, is ideal and should ensure that the development of the foetus is supported without promoting weight gain in the mare.  Because a balancer is so concentrated, only small amounts need to be fed which is particularly useful for mares that are heavily pregnant as they often have a reduced appetite.

For mares who don’t hold their weight particularly well Stud & Youngstock Mix or Cubes should be used, as they contain extra calories alongside the essential nutrients required.  Whatever you choose it’s very important to feed it at the manufacturer’s recommended levels to ensure the mare is receiving all the nutrients she and her growing foal need. 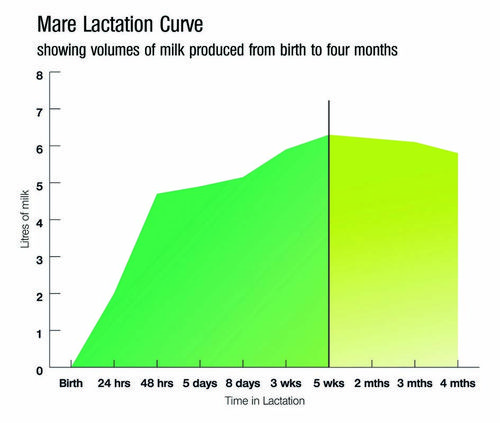 Milk production requires more energy than hard work and, whilst good quality grass makes a significant calorie contribution, a stud ration should also be fed to counteract any nutrient deficiencies in the pasture.  The good doer may again only need a low calorie, high nutrient Stud Balancer alongside good forage, whilst others may require Stud & Youngstock Mix or Cubes, fed at recommended levels, to supply additional calories. 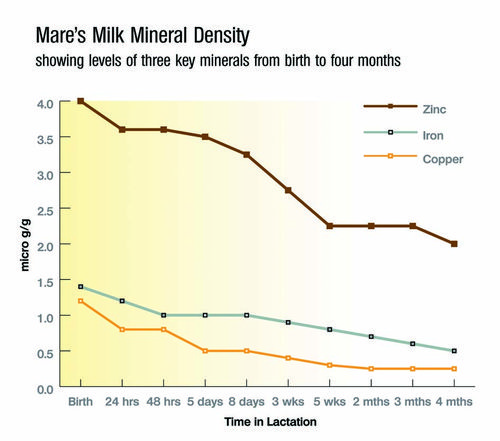 The composition of mare’s milk changes rapidly during the first days of lactation with further gradual changes thereafter.  Within the first 12 hours after birth, the mare must pass adequate antibody protection to her foal via the colostrum while the foal’s small intestine is still permeable to these large protein molecules.  Ideally the foal needs to be suckling within the first 2 hours after birth, as the antibody content of the colostrum is at its highest during this period.

If the mare’s diet has been lacking, her milk is likely to be of a poor quality or in short supply so the foal’s diet will need supplementing with milk-based Foal Creep Pellets to provide the extra calories and other nutrients that will be deficient.  3 - 5 weeks into lactation the mineral levels in the mare’s milk drop naturally by 40-60% and at this time it may be prudent to administer specially formulated vitamin and trace mineral supplement to help counteract any short falls.

At 10 – 21 days, foals begin nibbling at forage and concentrates and providing Foal Creep Pellets at this point, especially if the dam’s milk or grass availability is inadequate, can help encourage even growth.  It will also help encourage the maturation of the digestive tract in preparation for the eventual change to forage and compound feeds.  It’s also an ideal transition from milk to “hard feed” for orphan or rejected foals being reared on a mare’s milk replacer.

During month four of lactation, milk production decreases so the mare’s nutritional requirements reduce correspondingly, whilst the foal will now also only be receiving around 30% of his energy requirements from milk.  According to his body condition, the foal can now be introduced to a compound feed to complement forage – either a stud balancer for the better doer or stud mix or cubes for those with additional calorie requirements.  Timely introduction of “hard” feed will help the foal become established prior to weaning.

Care must be taken if producing foals for the sales or show ring as overfeeding can cause problems.  Careful monitoring of bodyweight, using a simple weightape and growth chart, is ideal for plotting the rate of growth and allows changes to be made to the diet as soon as any deviations from the “norm” are spotted.  Steady growth supported by correct nutrition is more likely to pay off in the long term with the production of a healthy youngster able to go on to enjoy a long and useful